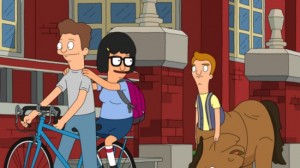 The day has come for Tina to have her first school dance and she’s excited to be able to ask Jimmy Jr. to be her date. Although he is going to be at the dance, he tells her that he wants to weigh his options before deciding to go with her. Deflated from not getting the answer she wanted, Tina walks him from school by an empty lot and sees a dance troupe practicing, a troupe that includes Josh, the guy she met at the grocery store, kissed, and exchanged numbers with. They haven’t been in conact since then, as he lost her number due to keeping it in his dance pants and getting sweaty, and he asks her to go to a school dance at his performing arts school. The problem is, both dances are on the same day and Tina doesn’t want to say yes to Josh until she hears from Jimmy Jr. All 3000 hours she’s spent having a fantasy relationship with the son of her father’s rivals will not go to waste.

The next day at school, Tina goes up to Jimmy and inquires about whether he made up his mind, to which he gets defensive and demands her to stop pressuring him. However, once he hears that she might have another option in Josh, he tells her that he will go to the dancer with her. Tina rejects him due to his acceptance coming not from wanting to be with her but from jealousy over her being with someone else, so it looks like her first dance will be at a school she doesn’t even go to.

When Josh picks her up that afternoon, Jimmy Jr. can’t help but be a little aggressive with him, making fun of his body and his money situation while trying to get Tina back. That, of course, doesn’t work, although Tina does love the fact that two boys are fighting over her. Jimmy tries again the next day, this time wrestling with Zeek in the cafeteria, but Tina mostly ignores it and makes him even crazier in the process. He then hires Gene and Louise to help him seduce Tina and win her back from Josh so they can go to the dance together.

Gene and Louise’s $20 plan comes in the form of a trojan horse of sorts; with Jimmy Jr. in the front and Gene in the rear of a horse costume, they approach Tina and Jimmy begins reciting a poem about how Tina takes his breath away. Before Tina can be properly seduced by misheard ramblings about Seattle having drugs and how Jimmy loves her more than hay, Josh comes by and picks her up, with the two of them riding off together.

The night of the dance, Bob and Linda hire Jen the babysitter to take care of Gene and Louise. After a few photos with Tina, everyone’s off to their respective dances; Tina becomes comfortable at Josh’s school fairly quickly and the two share a tender slow dance that nearly results in another kiss. Before they could lock lips for the first time since the dairy aisle, Jimmy shows up for the real grand gesture: a dance off. Along with Gene, Louise, Jen, and Zeek, he challenges Josh to a dance off , which turns out to be Louise’s idea. He agrees to it and the two show off two very different styles when they get their turn on the floor. While Jimmy’s very expressive and theatrical, even breaking out a smoke machine for his grand finale, Josh performs a ballet routine that ends with his “death” and makes Gene cry.

Tina gets flustered and says that she can’t choose, but she has a better idea. She then puts one hand on Josh’s hip and one hand on Jimmy’s before attempting to dance with the two of them, proposing that she didn’t have to choose for it to work. Unfortunately for Tina, neither Jimmy nor Josh were into a polyamorous relationship and they both proceed to dump Tina before she can parse out the make out wheel. However, she feels okay about the situation, still content at having had two boys want to be with her.

Schnapps for You
The upcoming school dance won’t only be the first one for Tina; it’ll be the first for Bob, too. He reveals that when he was 13, he had a date named Becky who he was going to go to a school dance with, even buying her a corsage. Unfortunately, she blew him off for another guy and didn’t bother to tell him until he was standing outside the gym with the flower in his hand, thereby turning him off the concept of dances for the rest of his school life. To help him get over the trauma and into the dancing mood, Linda agrees for the two of them to chaperone Tina’s dance; they’ll make a night of it, complete with stretch pink limo and fancy clothes, but things get off to a rocky start when Bob tells Linda how attractive he finds Ms. Jacobson, a teacher at the school and fellow chaperone. Linda’s offended and storms off after slapping him, holing herself up in the bathroom until she tells him that it was all a part of her master plan. She wanted Bob to get the full experience of being at a middle school dance, including the drama that comes along with hormonal preteens, and the two make up over Schnapps and dirty dancing. They are then kicked out of the dance for getting a little too dirty with each other.

Additional thoughts and observations:
-Apologies for not getting a recap of last week’s episode up. Technical difficulties and all that.
-“Oh, Bobby, that’s what I love about you. Your sad stories.”
-“Alright, that’s my maybe baby!”
-“Yeah, you can zip each other up.”
-“We’ve got chemistry.” “I’ve got a butt. Look at it.”?
-“Great belt.” “Great neck.”
-“I thought you knew how to seduce your sister.”
-“A pants off? For me?!”
-“I should always carry roses.”
-“Let’s put the tri- in triangle.”
-I really like all of Jimmy Jr.’s random dancing in the halls, for some reason. He’s an odd duck, but he’s somebody I could definitely see Tina being drawn to.
-I kind of miss Jimmy Pesto, though. They haven’t had a plot around him since last season, I think.
-Tina’s last boyfriend was Roberto, who was papier mache. Gene may or may not have tried to take a shower with him.
-Linda named a gay raccoon outside their restaurant “Little King Trash Mouth.” How does she know he’s gay, you ask? He has a husband. Duh.
-Louise photo bombing the first photo of Bob and Tina was awesome, as was her “sisters wives” comment about the possibility of Tina dating both Josh and Jimmy.
-Jen needs to invest in some backup puzzles (and more finger condom-puppets) if she wants to keep babysitting Gene and Louise.
-Tina telling Josh and Jimmy not to become self-conscious if they get sweaty and their shirts stuck to their abs.
-Next week on Bob’s Burgers: The Belchers head to Florida to see Linda’s parents, who are living in a senior center full of swingers, while Tina, Gene, and Louise look for an infamous python.