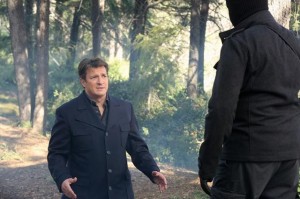 So, it’s a day later and I’m still freaking out about “Hunt”, so I will try and keep myself in check. In the thrilling conclusion of this amazing 2-parter we got to finally meet Richard Castle’s equally ruggedly handsome father played by James Brolin. Can I just say, nicely done Martha! “Hunt” was so intense, my heart was racing pretty much the entire episode. I was literally on the edge of my seat. Just seeing Castle so emotional was making me cry. “Hunt” is one of my favourite episodes this season. In fact, “Target” and “Hunt” just surpassed “Tick, Tick, Tick…” and “Boom” as my favourite 2-parter Castle has ever done.

There are many reasons why I watch Castle alone, but one of them is because I tend to talk and yell at my television a good part of the time. Last night was no different. I think I yelled out, “What about Alexis?!” at least 10 times when the kidnappers were letting Sara go. My heart sank for Castle. Then it literally broke when Castle walked away from Kate to tell Martha what had happened. You would think I’d be mad at this show for breaking my heart so many times in 2 weeks but I love this show even more.

Castle really meant it when he said he’d do anything to save his daughter and he did so by taking off for Paris. I could see why he did it but I hate that he lied to both Kate and Martha. I loved what Beckett said though, “He’s acting like a father, I have to act like a cop.” Kate can go off the reservation sometimes as we saw a few episodes ago but in the end she was a professional and did whatever was possible to save Alexis.

After the kidnappers didn’t release Alexis, I started to realize this case was so much more than we thought. Just the mention of spies made my eyes light up. Castle was just so emotionally compromised, I got such a bad feeling. My first WTF moment came when we found out Alexis was the target not her friend Sara. My other WTF moment came when Henri sold Castle out. At that point I yelled out a few expletive’s that shall not be repeated. This episode was just insane.

Can I just say, bravo to the casting department. Getting James Brolin to play Richard Castle’s father is just pure brilliance. I loved his, “Get in the car” line. A total throw back of the days of Beckett saying “Stay in the car, Castle.” As if I wasn’t freaking out already, I totally freaked out even more at the mention of the name Volkov. I wonder if the Castle writers are fans of Chuck? A baddy named Volkov was the mastermind behind the kidnapping. Pretty close to Alexei Volkoff, the baddy from Chuck. Gotta love it!

Freak out moment #20 – “Richard, I am your father.” Seriously? They totally killed me with that line. Ever since “Linchpin” there was speculation Richard’s father was in the intelligence community. It was great that this was confirmed. It was also confirmed it was because of his father, Castle first got access to the CIA for his book research. I just loved Castle with his dad. I hope there’s many more moments to come. I absolutely loved when he said to Castle, “You’ve been playing cop for years. You wanna play spy?” Total squee moment if there was one.

The tears started back up again when Castle was brought to Alexis. Then the tears went away and my jaw literally fell to the ground when the charge went off and the bad guys blew up. I didn’t think my heart was even intact anymore, but it broke even more when Castle wanted more time with his father. I’m pretty sure everyone that knows me, knows I totally freaked out when his father said “Always.” It’s such a trigger word for me. I could hear someone say it at work or while I’m out and I automatically squee and think of Castle. Yes, I am well aware I am a freak.

Before I get into the ending, I need to discuss that interrogation scene. There have been some pretty amazing interrogation scenes in this show, but the one in “Hunt” is just the best. I’m even going to be so bold as to say it’s the best one I’ve ever seen on any show! Just give Stana all the awards please. Kate kicked the chair from underneath the table while Henson’s girlfriend was sitting on it!! I got some serious shivers down my spine when Kate said, “I’m not a cop today, honey.” Pure perfection! I think I fell even more in love with Kate Beckett. If that’s actually possible. Just like her facial expressions, Stana just rocks the interrogation scenes. I could watch them all day long.

I absolutely loved the ending. Castle and Alexis were just too cute for words. I would say he’s one of the best father’s on television. Who would have guessed that when this series first started? We always talk about Beckett’s progression during the years, what about Castle? He’s grown so much as a man and father. My heart melted when Beckett gave that huge hug to Castle and said “Please don’t do anything like that again without me.” We also got a Caskett kiss with crap lighting. Ok! who wants to start sending lightbulbs to Marlowe and co.? Come on man! You’re killing us here. Here’s hoping the 100th episode will have many bright kisses. I also really loved the Kate and Alexis hug. They were even walking arm in arm. I would really love to see more of their relationship going forward.  Castle, Kate, Alexis, and Martha were just so adorable. I love all 4 of them together.

My heart is racing like mad just thinking about “Hunt”. Such an incredible episode. The whole Castle team just amazes me week after week. I literally fall in love with this show more and more after each episode. This show always makes my heart melt.

Now we have to wait 3 weeks for an all-new episode. A re-watch is definitely in order. Don’t worry, I have many incredible episodes to choose from.