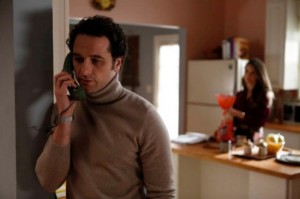 FX has announced a second season renewal for KGB drama The Americans after the show rebounded in the L+SD ratings last night. Starring Matthew Rhys and Keri Russell as married Soviet agents, the critically acclaimed period piece has nine more episodes scheduled to air in its first season, culminating in the season finale on May 1st.

To culminate on the attention garnered from the renewal (and to allow anyone that has missed any episode to catch up), the network will be showing a marathon of the first five episodes on Friday, March 1st, beginning at 10:00.

Below are the times, titles, and descriptions for each episode in the marathon:

“Pilot” – (Airs 10:00 PM – 11:32 PM E/P) – The Americans is a period drama about the complex marriage of two KGB spies posing as Americans in suburban Washington D.C. shortly after Ronald Reagan is elected President. The arranged marriage of Philip and Elizabeth Jennings grows more passionate and genuine by the day, but is constantly tested by the escalation of the Cold War. Tensions heighten upon the arrival of a new neighbor, Stan Beeman, an FBI agent.

“The Clock” – (Airs 11:32 PM – 12:35 AM E/P) – When Philip and Elizabeth are given an urgent task to plant a bug in Defense Secretary Caspar Weinberger’s office, they risk exposure when an unwilling maid of the Weinberger home refuses to cooperate. Stan closes in on a member of the Soviet Rezidentura in an effort to uncover the identities of deep cover Directorate S operatives.

“Gregory” – (Airs 12:35 AM – 1:36 AM E/P) – Philip and Elizabeth discover that their murdered colleague Robert had a wife they never knew about. As they try to determine what she knows and where her allegiance lies, Stan’s investigation into Robert’s death puts him hot on their trail.

“In Control” – (Airs 1:36 AM – 2:36 AM E/P) – When an assassin attempts to kill President Reagan, Philip and Elizabeth scramble to handle the fallout within the KGB. Meanwhile, Stan pressures his source within the Rezidentura to find out if the KGB was responsible for the attempted assassination.

“Comint” – (Airs 2:36 AM – 3:36 AM E/P) – A crucial agent crumbles under emotional distress and threatens to topple a valuable network of KGB informants. Professionally, Philip and Elizabeth are tasked with infiltrating the FBI’s new communications encryption system while personally they are forced to grapple with one of the darker aspects of life as a spy.

The Americans airs Wednesdays at 10:00 on FX. You can check out spoilers from upcoming episodes here.

What have you thought about the first four episodes of The Americans? Where do you expect the show to go in season two? Will you use the upcoming marathon to introduce the show to someone who isn’t already watching the show?