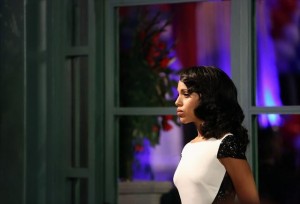 Captain Jake Ballard showed up in the Scandal-verse looking like a potential match for Olivia. He was good-looking, charming, and didn’t back down from her like so many others had in the past; granted, he was also a little pushy, but compared to the rest of the D.C. higher-ups we’ve been exposed to, he was practically an angel. That is, until it was revealed that he had Olivia’s apartment under surveillance and that their random meeting in the coffee shop might not have been so random after all. Just who exactly is Jake Ballard and what does he want with Olivia?

On tonight’s episode of Scandal, Jake has finally worn Olivia down and gotten the date that he was so desperate for last week. Olivia, of course, doesn’t consider the champagne-fueled outing a date and presses him for information about Wendy’s death, particularly about something called “albatross.” He gives her a brief explanation before returning to “date” mode, but it might be enough of a lead for one of Olivia’s associates to go on. You have to wonder, though, why Jake wanted to go out so badly. Had he been watching Olivia for a while and fallen in love with the woman he saw, prompting him to seek her out in real life? He’s laying the romance angle on thick and doesn’t seem to want to talk about work, so there’s a chance that, beneath the likely ulterior motive, part of him wants to get to know her.

Or does he have another motive for engaging her personally? Might Jake be trying to get closer to Olivia to gather information himself…or for whoever he’s working for?

Elsewhere on Scandal, Pope & Associates is hired by an up and coming politician for a little matchmaking, while David feels like he’s being followed and Fitz still doesn’t know who, if anyone, he can trust.

Who do you think hired Jake to spy on Olivia? How long has it been going on? Can Fitz trust anyone in his inner circle?