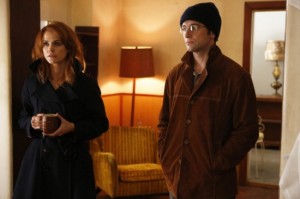 Last week on The Americans, Philip and Elizabeth’s marriage suffered a serious blow when he found out about her affair with Gregory, one of their contacts with whom they worked to nab Robert’s wife. In an ironic twist, Elizabeth broke things off with Gregory due to finally feeling close with her husband and wanting to give their relationship the chance to flourish, but once Philip found out about her indiscretion, he seemed to wash his hands of ever thinking about her in a loving way again. Just how many more events like last week can the Jennings’ marriage withstand? What’s next on the list of major events they’ll have to withstand if they want to keep their cover?

Listed below are the dates, titles, and descriptions of the next three episodes of The Americans.

Wednesday, February 20th – “In Control”
When an assassin attempts to kill President Reagan, Philip and Elizabeth scramble to handle the fallout within the KGB. Meanwhile, Stan pressures his source within the Rezidentura to find out if the KGB was responsible for the attempted assassination.

Wednesday, February 27th – “COMINT”
A crucial agent crumbles under emotional distress and threatens to topple a valuable network of KGB informants. Professionally, Philip and Elizabeth are tasked with infiltrating the FBI’s new communications encryption system while personally they are forced to grapple with one of the darker aspects of life as a spy.

Wednesday, March 6th – “Trust Me”
A mole hunt within the KGB causes suspicion amongst allies and shatters trust within the Jennings’ marriage. Meanwhile, Stan’s plan to keep his mole safe puts her at even greater risk of discovery.

Will Philip and Elizabeth be able to stay together through the search for the KGB mole? How will the botched assassination attempt on President Reagan impact the KGB and the Jennings’ marriage? Is Stan’s mole in danger of being found out?