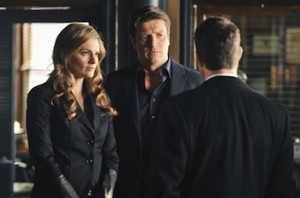 As I’m writing this review of “Target” my heart is pounding so hard in my chest, I’m surprised it’s still in there. I’m still reeling from Sunday night’s finale of Downton Abbey. My heart broke into a million little pieces and “Target” just added to my misery.

There have been other intense episodes of Castle, but none were like this. We saw a whole new side of Castle. A side Kate Beckett didn’t even know existed. Rick Castle was a man that would do anything to save his daughter. We all know Nathan Fillion can do comedy but his dramatic skills were just incredible. His performance in “Target” was definitely Emmy worthy.

When Castle discovered Alexis’s cell phone in the lost and found, my heart just sank. Watching as Castle went through every emotion just broke me. I couldn’t hold my tears in any longer when Beckett embraced Castle at the precinct. I loved that Beckett didn’t care if Gates saw them. I’m pretty sure the last thing on her mind was Captain Gates finding out about her and Castle’s relationship. The most important thing was finding Alexis and I got serious chills when Gates told Beckett to do whatever she needed to do to get Castle back his little girl.

As if I wasn’t already a wreck, I really broke down when Castle was watching Alexis’s Vlog entry. It crushed me when he was breaking down. Castle was a father so helpless and vulnerable just wanting his daughter back. I was pleasantly surprised to see Martha so strong and loved when she was reassuring Castle how strong Alexis is. Alexis is so wise beyond her years and if anyone can get through this, it’s her.

My heartbreak continued when Castle showed up at Greenpoint and saw the blood in the van. I thought for sure he was going to lose it. Thank goodness for Kate calming him down. If you needed any evidence of how far Castle would go to save his daughter, just reference the scene with Douglas Stevens. That scene was so incredibly intense. I would also appeal to someone’s humanity to help find my child.

“Target” certainly made up for the lack of Caskett moments in earlier episodes. Nathan and Stana have such incredible chemistry. They’re just on a whole other level. Whether it’s comedy or a dramatic moment, they just knock it out of the park every single time.  Castle and Beckett holding hands while Castle was talking about Alexis being born and loving her so much made the tears start to flow again. What about the fact that Gates saw them holding hands! Surely she has to know about them? I’m in the group that believes she’s known about them for a while and is just choosing not to say anything. She sees how amazing they work together and doesn’t want to break that up, even if Castle isn’t her favourite person. I’m sure it will all come out in due time.

Did anyone else get heart palpatations when they showed Alexis’s picture on the murder board? Castle’s crying didn’t help my poor heart. Just knowing this was a two parter and wasn’t going to get solved in one episode didn’t make things easier. A somewhat cheery moment came when Alexis picked the lock on the door. She is Rick Castle’s daughter, she would know how to pick a lock. I was on the edge of my seat as Alexis and her friend Sara ran out of the room they were being held captive in. Alexis was able to reach Rick by using Skype, unfortunately the cell phone battery was dying and the men holding them were hot on her trail. My heart was pounding even harder when Castle told Alexis to just run. Thank goodness the FBI was able to get a trace on the call but my happiness turned dark when the camera panned and we saw that Alexis was in Paris. As Alexis yelled for help, someone came up from behind her and covered her mouth.

Cut to black! To be continued!

This episode nearly killed me. How will I survive until next Monday? “Target” was definitely not for the faint of heart. I must have had tears in my eyes the entire episode. If anyone can rescue Alexis and Sara it’s Beckett, Castle, and the whole team.