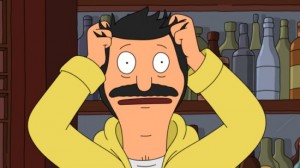 After talking over with Bob ways to save money, Linda takes the kids with her on a trip to Fresh Feed, a local grocery store with cheap prices and quality product. There she meets an employee named Greg and the two enjoy the store’s Disco Minute before she compliments him on the fun work environment and he offers her a part-time job. As she’s been feeling underappreciated at work lately. what with her complicated (but effective) bookkeeping that has the Belchers above water, Linda accepts Greg’s offer and begins working, to the dismay of Bob.

At first, Fresh Feed is exactly the place that Linda needs to be at. There are quirky employees (Mitch, the bread man who plays in a Steve Miller Band cover band), a relaxing atmosphere, and plenty of opportunities for her to make a real difference; only here, she’ll get noticed for doing all that she does. Linda has a great first day, getting booted up to working the 10 items or less register and spending much of her time pricing (and singing), while Bob is pretty miserable without his wife around. He can’t get the thermostat right, since he doesn’t take into account all the factors that Linda did when she controlled it, and he’s lonely without having her around to talk to while he worked.

Linda ends up acing her performance review of her first week on the job and getting an offer to become a full-time shift manager. Bob offers to give her a performance review in an effort to win her back to the restaurant and make her feel more noticed, only to lean too hard on her faults (on the phone too much, doesn’t wear a hairnet, dirty hands), give her a low-ish score (7.5-8/10), and drive her to accept the offer from Fresh Feed.

The first day of Linda being a manager turns out to be pretty awful. Semi-pro kite flyer Greg, the man who hired her and the actual manager, takes the day off to go fly kites, leaving Linda with a hefty set of keys and even more responsibility. Once alone,the employees bombard her with requests for time off; one woman wants to leave early to go pick up her kids (and tells Linda that she’ll be sick the next day), Mitch asks to go to band rehearsal, and Jamie (who gives out egg roll samples) needs a nap after having a beer and some meatloaf. Initially, Linda tries to be sensitive to everyone’s needs, but eventually, she sees that nobody wants to do their work and everybody wants to pawn their work off on her. With the store falling apart and Greg too busy to answer the phone, Linda calls the kids and gets them to come help. However, none of the three alleviate the stress of backed up aisles and a chaotic environment.

Back at the restaurant, the power has been turned off and there’s no beef shipment coming in thanks to Bob not being able to keep up with Linda’s financial system. It’s then that he decides to go to the store and win Linda back, which he does by apologizing over the microphone. Linda forgives him and quits her job due to hating the customers and her fellow employees.

Love in the Dairy Aisle
During Linda’s first day, she took Tina into the dairy fridge, where Tina has a run-in with a boy her age over a carton of milk. He has a band-aid on his finger from a turtle bite and the two awkwardly flirt before he has to go; Tina might not have gotten his name or number, but she has the band-aid, since it came off before he left. When a detailed flyer doesn’t bring the mystery boy out of hiding, Tina thinks that she lost her chance to be with him…until she heads back to the store and finds him, again, in the milk aisle. He had been back to Fresh Feed for a week looking for her and he talks her into giving it a shot with him. Tina sticks the top half of her body through the back of the milk shelves and kisses the boy (named Josh) before giving him her number.

Additional thoughts and observations:
-“At least my bedroom beef supply is free.”
-“I think there’s somebody behind the milk. Maybe it’s a dairy fairy.”
-“You finally got out, Mom. Don’t look back.”
-“Two degrees killed the dinosaurs.”
-“C’mon, Tina. Don’t play God. It’s dangerous.”
-What happened to Marcy’s husband is real and has a name.
-Yogurt-covered peanut butter mini donuts sound spectacular and I want one right now.
-My favorite gags of the night were Gene running out the door for bacon, Louise making it rain shrimp, and Teddy scatting.
-Multiple Linda songs tonight, including one (lovely) duet with Bob. Awesome.
-The Abracadabblers is the greatest band name in the history of music.
–Bob’s Burgers is a repeat next week, but in two weeks, Gene befriends a talking toilet (voiced by Jon Hamm) and helps it hide from the evil toilet hunter.