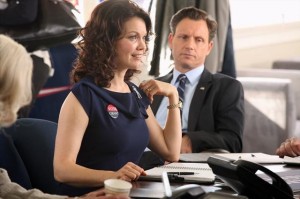 Last week on Scandal, Mellie induced labor a month ahead of time in a last minute effort to keep Fitz from filing for divorce. She wanted to capture a similar feeling of connection that defined the birth of their first two children, in addition to making the hypothetical divorce hit him that much harder in the polls. If he leaves the seemingly dedicated mother of a newborn child to be with his mistress, Fitz will go from the high that his recovery brought him to the lowest point of his time in office with no real way to recover. Will the threat of losing the respect of the American public keep him from filing for divorce or is his mind that set in leaving Mellie that he’d take the hit?

On the next episode of Scandal, America’s (as yet unnamed) Baby is making his public debut in a photo shoot at the Oval Office. After Mellie calls for a break in the action, passing the baby to the nurse and sanitizing her hands, Fitz makes a demand of her: when they divorce, he wants to be able to see his child. Of course, Mellie will fight tooth-and-nail to remain First Lady and she tells him as such, only Fitz doesn’t care. His mind has already been made up and if things don’t take a drastic turn around, he’s going to file for divorce from Mellie and live the life that he’s wanted to for so long. Poll numbers and public approval mean very little to Fitz since the assassination attempt, having been replaced by the desire to be happy, fulfilled, and alongside the one he loves. Does Mellie have one last card to play to keep him married to her?

Elsewhere on Scandal, David Rosen uncovers the truth about the Cytron case, while Olivia, Cyrus, Hollis, Mellie, and Verna figure out how to protect themselves from the blowback.

Do you think that Mellie and Fitz will ever get a divorce? What will they end up naming the baby? How will Olivia take the news of the birth?