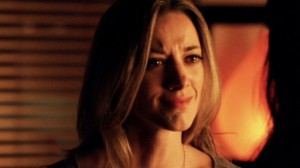 Lauren is still trying to keep up with Bo’s mega libido, but she’s getting burnt out. After another all nighter, the doctor skips out on morning sex in order to catch up on stuff for work, leaving Bo hungry and anxious. After going through everything she owned looking for chocolate, Bo heads to the Riatta where she runs into Dyson, who is working a case with Tamsin and needs her help. There has been a string of three deaths that looked like suicides but smelled like fae involvement, including aspiring tight roper Lloyd the Magnificent, and he’s discovered that they were all patients at the Better Way Clinic for Health and Wellness. He wants Bo to go undercover as couples therapist Dr. Helen Green and get a look at patient records, only she can’t control her hunger long enough to pay attention to him when he talks.

When Bo gets to the clinic, it’s decidedly more new age than she expected. Rather than focusing purely on cognitive-behavioral therapy, there’s a prominent regression therapy program featuring Dr. Palmer and a chatty bohemian secretary named Tabitha who shows her around the building, including the community cat Dr. Bob and fish Dr. Nemo. Bo sees a gay couple with issues of putting work before sex and a woman who is married to a submarine, only interrupted by an argument with Lauren concerning the first couple mirroring their current situation and the resentment therein, manifesting itself as insults about Bo’s education.

Back at the clinic, Bo comes across Rolly, an asthmatic man who claims to be “Captain Humongous,” possessing the ability to stop a car dead in its tracks. After a run-in with Dr. Palmer where he nearly caught her rifling through his desk, Bo finds Rolly in the parking garage attempting to lift a car but failing to do so. There she also finds Tabitha, who turns out to be a hungry Suicide Fae that feeds on despair. Bo, having just pushed Rolly away from a moving car and taken the brunt of the hit, suspects that Tabitha could be the culprit, but once the Suicide Fae hit her in the stomach and ran, she passed out.

Bo makes up with and refuels from Lauren; the doctor tells her that Tabitha couldn’t have been the killer, as the tight rope walker’s autopsy revealed no traces of serotonin or endorphins. Whereas a Suicide Fae feeds on despair, the culprit is feeding off of excitement and adrenaline. Before Bo can head off to take down Dr. Palmer, who she believes is the killer, there’s the matter of her hunger to attend to; her bruise, the result of internal bleeding, has returned deeper and darker than ever and Dyson talks her into feeding off of him at the police station. The two share a steamy moment in the interrogation room before he heads to the clinic to go undercover at Dr. Palmer’s therapy, since he can sniff out fae.

Only Dr. Palmer’s office is packed with scents (incense, candles, cat litter) that don’t allow Dyson to confirm if Palmer’s fae. Despite a nick on the neck, he did get a lot out of therapy, though before they write Palmer completely off, Tabitha turns up dead in a lake, clad in a mermaid costume. While Dyson volunteers to go back into therapy to suss out Palmer, Bo goes to Lauren, who had been looking at crime scene photos and noticed the nick on the neck of every victim. Remembering that Dyson has the same mark, Bo leaves, only to get a call from Tamsin that Dyson had yet to return from the clinic and wasn’t answering his phone.

He’s instead wielding a dagger at Dr. Palmer and rambling about how he finally feels free after their session; by the time Bo and Tamsin make it to the clinic, Dyson’s on the roof, claiming to want to become the King of the Creatures and fly away. Palmer ends up not being the killer, nor any type of fae, with the actual culprit being Dr. Bob, the office cat. Bob is a Rakshasa, an Indonesian shapeshifter that can only be defeated by lead. While Bo talks a shirtless Dyson down from jumping off the roof, Tamsin takes on Dr. Bob, who morphs into a huge creature that she cuts down with a lead weapon kept underneath her jacket.

At the Riatta, Bo makes it clear to Dyson that things between them can’t reignite and that they can’t be physical again, while later, apologizing to Lauren for not telling her about feeding off of him at the station. Lauren’s gotten more okay with the idea of Bo feeding on more than one person, but her only ground rule is that it can’t be Dyson.

Get Out of My Way
While Bo hunts around the apartment for chocolate following another night with Lauren, Kenzi tries to get her best friend to have a heart to heart with her; the wound on her arm from the Norn has yet to heal and she doesn’t know what to do to help it along, but before she can explain what’s going on, Bo runs to the store for more food. Kenzi then goes to talk to Hale, thinking that she can unload all of her bad mojo and get a laugh or two for her troubles from her friend, but he’s no longer a simple fae cop with time on his hands. Hale’s the Ash and as such, he has a myriad of important things to do and therefore can’t drop everything to listen to Kenzi. However, he does agree to make her his stylist, if only to give her something to do.

Later, Kenzi bursts into the room and interrupts an important meeting with an ambassador who required complete silence to confer with her ancestors. As she only comes out into the light every 4 months, Hale can’t afford to let her go without getting her to agree to Dyson and Tamsin’s trial program. Trick confronts him regarding how he handles Kenzi  with kid gloves, informing him that she’s not one of them and that he has to do what he has to do in order to protect the office he’s in and the fae he serves.

When Kenzi tries to come back to Hale’s office, she’s stopped by security outside the door and Hale gets them to close the door on her. Walking down the street immediately after, she leaves a voicemail for Bo before exposing her wound, complete with lack of skin on her forearm, and getting pulled into the shadows by an unknown force.

Additional thoughts and observations:
-“Say formaldehyde again.”
-“Kenzi’s got butt loads of stuff.”
-I may not be that up on my fae mythology, but why can’t Bo do for Lauren what she did for the couple in therapy?
-Although I love Kenzi and Hale, why didn’t he just pull her aside and talk to her about her interruption vs. completely shutting her out?
-I don’t have a side in the whole Lost Girl shipper world, but the Bo/Dyson feeding scene was quite hot.
-Next week on Lost Girl: Bo heads to a swingers’ club to investigate a string of people turning into goo and makes a drastic move to cull Kenzi’s clingy behavior.