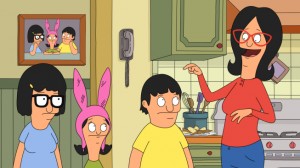 A death in the family around the holiday season is hard to deal with and can cast a pall over that time of year for the foreseeable future, but on the winter finale Bob’s Burgers, it’ll be a financial opportunity for the Belcher family.

Bob’s distant uncle Ernie has passed away and left to his nephew a storage unit in town. However, rather than being filled with antiques, family artifacts, and memories from long ago, it’s home to Chet (guest star Zach Galifianakis), a homeless man who had been using the unit as his place of residence. Linda invites him to come to the restaurant for a meal and a warm evening and it turns out that he has an aptitude for creating window displays. Bob hasn’t been feeling the holiday spirit this year, so turning the restaurant’s handful of taped snowflakes into a festive encapsulation of a holiday he once held near and dear might be the thing to get him in touch with his inner Santa.

Bob isn’t jaded enough about the holiday season to where a new display would be a futile effort to reach him. Granted, the family has been having money problems and could have used the extra cash from selling items in the storage unit to fund the kids’ Christmas lists, but the Belchers are close enough to where their happiness doesn’t come from their material wealth. They’ve been struggling for a while and still have a lot of love for one another; the holiday season is just a time where that can get lost amid toy ads, gray skies, and a lack of eggnog, so transforming the restaurant could be the reminder that Bob needs.

The winter finale of Bob’s Burgers airs Sunday at 8:30 on FOX. The show, which has already been renewed for a fourth production cycle, will resume its season on Sunday, January 6th.

What’s been your favorite episode of Bob’s Burgers this fall? Considering his talent, how will Chet decorate the restaurant? Will Tina, Gene, and Louise get what they want for Christmas?