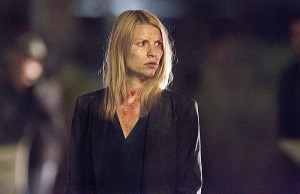 The last episode of Homeland found Abu Nazir letting Carrie go after holding the CIA Agent captive, only to see her go running back into the building after alerting her team of where she was. Nazir looked to be gone after giving Brody what he wanted, but the CIA are as close as they’ve ever been to capturing the terror suspect and securing the safety of the country.

However, before they can go after Nazir, Carrie wants to question the men about the events that led to his escape. He managed to flee the scene through a tunnel that wasn’t secured, which raises her suspicions as to the possibility of the mole being right there with her. Quinn doesn’t want her to question the loyalty of the ex-military officers that are on the team, though there has to be a reason he’s so apprehensive about letting Carrie do her thing. She may not be the most stable individual working for the CIA and her recklessness may one day do her in, but Carrie’s intuition has been right a vast majority of the time and Quinn knows that. He knows her reputation and he knows that if you let her look long enough, she’ll find something. So what is he hiding?

Meanwhile on Homeland, Roya Hamad and Saul are subject to (separate) questioning for two different reasons. The CIA has finally pulled the trigger on bringing Hamad in, something they brought up once Brody went missing several episodes ago. Although she may talk a big game to deliberately intimidate/control Brody, Hamad seems to have cracked during her interrogation, at least judging from the preview below. She’s deflecting her share of the responsibility in the plan to attack America on Nazir and paints herself as an innocent woman that fell for a charismatic leader with an exceptional ability to charm. Saul, on the other hand, was detained by Estes at the end of last week’s episode in order to keep him from spreading his (correct) theory about the reason Quinn’s still on the mission. There have been multiple incidents that have pointed to Saul as a potential mole suspect, but Estes is merely trying to protect his own neck and give Quinn a chance to take out Brody, not clean up the department of any “unsavory” types.

If he can manage to catch the mole in the process, then so be it and he’ll take the extra positive publicity that would come along with that.

Homeland airs Sunday at 10:00 on Showtime.

Who do you think is the CIA mole? What information will Roya give up in questioning? Will Quinn stop Carrie from following her hunch and investigating Nazir’s escape?