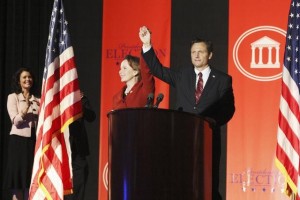 The turning point for the first season of Scandal came in penultimate episode “The Trail,” which flashed back to the presidential campaign and the beginnings of Olivia and Fitz’s relationship. Prior to the episode, the show had been an enjoyable political procedural built around a dynamic lead performance and an intriguing central mystery, but there was a decided lack of emotion involved. It went along with Olivia Pope’s reputation of being a cold-blooded fixer willing to do anything to protect her clients and you got to know the professional side of the savvy politico quite well, though you couldn’t quite get a read on her as a person and who she was before she was The Olivia Pope.

On the next episode of Scandal, we’ll be heading back to the past, only this time Fitz is (illegally) elected and he has to figure out a way to keep seeing Olivia while under the greatest microscope in the world. Olivia, who was brought back to that world upon seeing Fitz’s American flag pin, was the one who didn’t want to continue the affair; whether it be due to Mellie, concerns about him getting into trouble, or a desire to not be the “other woman” anymore, she’s pulling away in the sneak peeks below. Only Fitz doesn’t care about the dangers of being with her. All he knows is that he wants Olivia near him, next to him as much as possible and he’ll do anything he can to make that happen. Tragedy can act as a magnet that brings people back together and reduces past squabbles to mere dust and it might not be any different for Olivia and Fitz.

Scandal airs Thursday at 10:00 on ABC. You can check out another sneak peek from the next episode, where Olivia begins to come undone in the middle of the ER, here.

What do you think we’ll learn about Olivia and Fitz through the next set of flashbacks? Do you think that the shooting will bring the two together again after both have tried to move on?