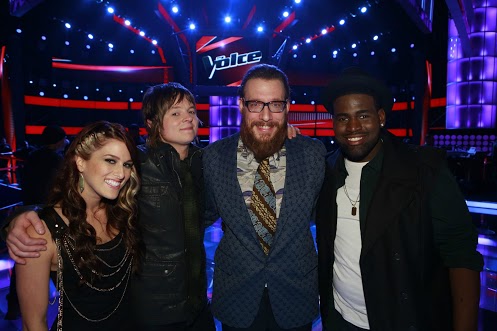 Last night on The Voice, six became four when we said goodbye to Melanie Martinez and Amanda Brown, both members of Team Adam. Although it’s getting tougher to see the contestants sent home, I must say that I believe the viewers got it right for the second week in a row.

Melanie has been hanging on by a shred throughout the majority of the competition with coach Adam Levine pushing her along. The truth is, however, what started off as a quirky and likable misfit persona had begun to show some diva antics with eye rolling and lack of eye contact all together during the judges’ comments. More importantly, all of her songs had begun to sound the same with the whispery little girl voice that could only remain interesting for so long.

Amanda Brown, on the other hand, may or may not have been the best choice to go home last night, but based on the last few weeks’ performances and the viewers’ reaction to them, it seemed inevitable. Wildly talented, but with a heart for rock instead of the power ballads she was been given, Amanda just didn’t seem to be able to deliver consistently appealing performances, a fact that I believe led to her elimination last night.

Left in the competition are Terry McDermott, Cassadee Pope, Trevin Hunte, and Nicholas David.  With only four left in the competition going into next week’s quarterfinals, it will be more difficult than ever to say goodbye to the talent that is left and now that Team Adam is officially out of the running, it is left to Team Blake and Team Cee Lo to fight it out to become the season three winner of The Voice.

Do you think America got it right last night? Who do you think should have went home?