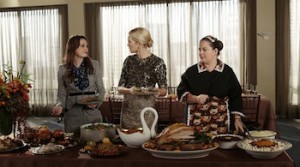 I have never been shy to share my feelings about this show. I think it should finally end but on the other hand it’s finally getting good. I can only hope it will go out with a bang. Not literally though.

It was Thanksgiving on the Upper East Side and Dan and Serena were in bed still together. Dan is such a snake! Chuck was drowning his sorrows, which was really depressing. Blair being very mature decided to give Chuck all the time and space he needed. Blair made her feelings quite clear that she didn’t want Serena back with Dan. It must be noted that Blair is the most intelligent character on this show at the moment.

Serena came up with a brilliant plan. Dan and Serena should invite everyone over for Thanksgiving dinner. What could possibly go wrong? Dan had major misgivings but eventually caved. Every time Dan shows up on my screen my blood pressure goes up. Another person that drives me insane is Chuck. “Unable to be with the woman I love.” Seriously Chuck? You are the only one standing in your way. Grow up!

It wouldn’t be your typical Gossip Girl episode without a little scheming. Blair had a plan to break up Serena and Dan and it involved Sage. Sage isn’t exactly my favourite character, but there’s only 2 episodes left so I guess I’ll just have to live with her until it’s over. Serena ended up “bumping” into Steven and Sage at the grocery store where she invited them over for Thanksgiving dinner. That won’t be awkward at all.

Dan further dug his grave with me when he started lambasting Serena for inviting Steven and Sage over for dinner. Is Dan for real? Dan is either an excellent actor or he’s starting to believe his lies.

Things then got a little dark on the Upper East Side. Bruce Kaplan who worked for Bart fell to his untimely death by falling off Bart Bass’s boat. Things didn’t taste Kosher with that one. Bart is quite the dark character and I wouldn’t want to mess with him. I’m quite worried for Nate. Bart knows all about Nate cooking The Spectator’s books and is now blackmailing Nate. This is not going to bode well for Nate.

I really wanted to give Chuck a hug after he thought he was successful in poising Lily against Bart. Either Lily was naive or she had something up her sleeve. Thank goodness Lily had a plan. She didn’t believe Bart for a second but sided with him to give herself time to get away. Way to go Lily!

The release of the Serena chapter at dinner was impeccable timing. Dan is just so jealous of Serena and her world. He still hasn’t let go of that young kid from Brooklyn with the chip on his shoulder. Dan actually believes the group thinks they’re better than him, but I believe Dan thinks he’s better than everyone else. I actually cheered on Nate when he punched Dan in the face. “All I did was tell the truth.” Keep on telling yourself that Dan.

With 2 episodes left I really don’t know how this show is going to redeem Dan in my eyes. Frankly, I don’t care if they do. I just want one thing to happen. Blair and Chuck need to be together! They’re going to war together and things are finally starting to take shape.

Some of the best lines of the night:

Georgina to Dan: “I am your everything.”

Blair to Serena after Blair learns Steven wants to get back together with Serena: “You must be in 7th Heaven.”

Dan to Serena: “No, I’m thrilled you invited your ex to our Thanksgiving. I was hoping maybe Ben or Carter or Colin could stop by for apple crostata.” 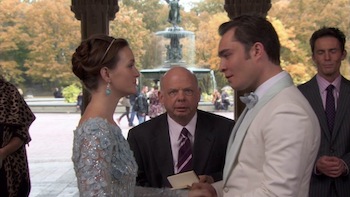 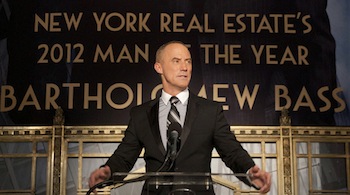 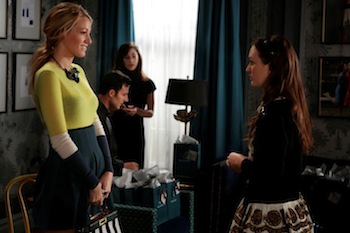 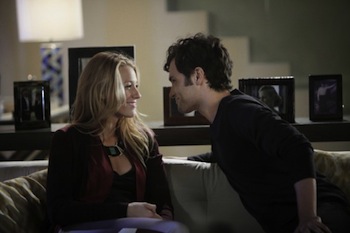