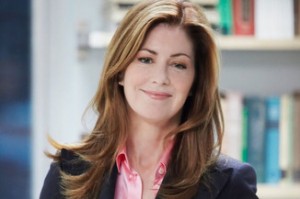 ABC has become the latest network to announce its plans for mid-season, which will include some sort of change to four nights.

Sundays will see the debut of Red Widow, whose two-hour premiere will air March 3rd at 9:00. On the 10th, the show shifts back an hour to the 10:00 slot following Revenge and replacing the recently canceled 666 Park Avenue, whose series finale will air in February. The show follows a California housewife who, after her mafia-connected husband gets murdered, decides to infiltrate the mob family responsible for his death in order to exact her revenge.

Monday, March 18th at 8:00 is the premiere date/time for the next cycle of Dancing with the Stars, with the results show following on Tuesday, March 26th at 9:00. There had been talk of resting the reality veteran, which saw record low ratings this past season, but for now, it marches on. Fall 2013 might tell a different story, though, especially if ratings go any lower and hype drops any further. Rather than go through with the planned Tuesday comedy bloc of How to Live with Your Parents, Family Tools, Happy Endings, and Don’t Trust the B, ABC has scheduled its Celebrity Diving series for the 8:00 slot beginning March 19th, where it will be taking over for The Taste. The latter, a lifestyle show from Anthony Bourdain, premieres Tuesday, January 22nd at 8:00 with a two-hour premiere before moving to 8:00 for the rest of its run beginning on the 29th. A revamped Body of Proof is set to return to its Tuesdays at 10:00 slot on Tuesday, February 5th for its 13-episode third season.

How to Live with Your Parents and Family Tools will instead be timesharing space on the Wednesday comedy bloc in a series of late season scheduling changes. Freshman comedy The Neighbors is set to air original episodes until its first season wraps up at the end of March; once it’s off the air, Suburgatory moves back to the 8:30 time slot it occupied last season on April 3rd, making room for How to Live with Your Parents to debut at 9:30 the same night. Suburgatory will then conclude its second season at the end of April, then allowing The Family Tools to premiere on May 1st at 8:30.

Thursday finds another drama being plugged into the 8:00 slot, with Zero Hour taking over for recently canceled Last Resort beginning February 14th. The show, starring Anthony Edwards, tells the story of a skeptics magazine editor getting involved in and looking into a major conspiracy with far-reaching effects.

Wednesday, April 3
8:30 Suburgatory (New Time Period Premiere)
9:30 How to Live with Your Parents (for the Rest of Your Life)