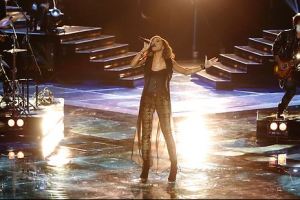 It’s down to the final 6 this week on The Voice and the remaining contestants have more pressure on them than ever as they enter the final week before the quarterfinals. With last week’s elimination of Cody Belew and Dez Duron, the viewers have made it clear that they mean business and that it is going to take more than a pretty face and some flashy theatrics to move on in the competition.

As it stands going into tonight, Team Christina has been knocked completely out of the competition. The remaining teams, however, each have two contestants still in the running to become the winner of season 3. Over on Team Blake, Terry McDermott and Cassadee Pope are still holding on strong, each seemingly with a huge fan base that will be crucial to help them move on in the competition. Keeping the dream alive on Team Cee Lo are Nicholas David and Trevin Hunte, both excellent contenders for the title. Perhaps the underdogs of the competition are the contestants over on Team Adam with Amanda Brown, whose voice should not have her in the underdog position but her inconsistency does, and Melanie Martinez, the only contestant left who was put through as the coach’s choice.

Tonight on The Voice, the remaining 6 contestants will battle it out on stage in hopes of convincing viewers that they deserve to make it to next week’s quarterfinals.