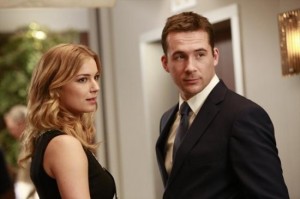 Every time I look at E.J. Bonilla, Marco Romero – former lover and CFO of Nolan and NolCorp – I see the little twerp I couldn’t stand on Guiding Light. Add Ashley Davenport and my screen is full of twerps when I’m watching Revenge. I still find it difficult to believe Daniel is in love with a former hooker. With all of his resources, Daniel never thought to do a background check on her? He dug up Marco from the depths of hell, but nothing on Ashley. Thank God Emily is there to shove bad news in his face.

The pluses are that Marco thinks he can threaten Nolan with all that talk of the money Amanda Clarke never got since she’s living above a bar. First of all, what a creep to think that just because you have money you wouldn’t want to live with the man you love above a bar that his family owned. Granted, Amanda wouldn’t want to do that, but that’s beside the point. Second, Emily and Amanda have been pretty honest about everything so Marco spouting off to Amanda about half a billion dollars wouldn’t come as much of a surprise to her. Without Emily, she would be nowhere, wouldn’t have Jack nor Carl. She wouldn’t be happy, and I believe she is.

Daniel finally saw Ashley having a field day with Daddy, but that just turned the plan Emily and Aiden had to access The Initiative on its ear. Does anyone else hope The Initiative shoots Daniel in the head? A one time poetry wimp playing against the big boys? He is in so far over his head. If his only hope are his parents, well, we’ve seen how well they’ve managed against The Initiative. Daniel should be dead meat, but something tells me Emily would save his sorry ass.

I’m also guessing there are Daniel fans out there who remember him as the guy Emily loved. If you think long and hard enough, you’ll remember he really had nothing to offer her, and spent most of their time together running back to mommy and daddy. Don’t let the fact he deleted Ashley’s photos while he held onto Emily’s sway you. It’s time for him to take care of himself, and if that means he gets stuck in the mire that is the unknown evil of The Initiative, then so be it.

I’ve also somehow completely missed that Aiden was involved in the NoelCorp takeover. I knew it was all being done with the planning of Emily and Nolan, but I obviously would not make a good spy.  I was so focused on getting to know the relationship between he and Emily that I lost track of what was happening with him elsewhere on canvas. That, and he’s hot. It can be difficult to focus when he’s on screen. I’m only being honest. Emily is finally with someone whom I approve. They suit each other perfectly.

Sadly, Carl Porter’s friend, Matt, the one who really killed Kenny & Nate Ryan’s father, decided to pay a visit to Jack for the baptism of his son and father’s namesake. He spotted the Ryans and Jack wisely had Nolan take a look into their history. No sooner did he deliver the goods on the brothers Ryan to Jack than Matt was shot down on the pier. A funny thing happened after that incident. Now when I see the Ryans, they seem like Siamese thugs. Whereas at one point Kenny was able to stand on his own and behave like a human, he’s now following Nate’s lead and acting like a first class bully. It’s so unappealing at their age.

What are your guesses for what’s to come in January? I hate to think about it, but the phone call from Victoria and the previews suggest Emily is going to go undercover as Daniel’s lover again. Just when she and Aiden admitted they were as happy as they expected they would ever be, and when we’ve come to enjoy them, they’re going to rip them apart. That will be difficult to watch.

How deep will the pile of doodoo be that the Porters find themselves in with the Ryans? What about Noel and the twerp? And can we please find out who or what The Initiative is? Here’s hoping for a lot of promo spots and news from now until the January return. Be sure to return here for all the latest news!