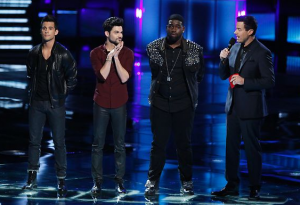 I knew there was a reason I liked The Voice above many other reality shows of its type. Last night, my faith in humanity was restored a bit when viewers made the right choice and sent the two contestants home that actually deserved to be shown the door.  Time after time, I’ve watched singing competitions where the less talented unexplainably stuck around while true talent was sent packing, but on last night’s results show, all ended as was meant to be when Dez Duron and Cody Belew were eliminated.

Now don’t get me wrong, I like Cody as much as the next guy, but towards the end, it seemed that he was not only a bit out of his league vocally, but also that the stage flair had become as important, if not more, to him than his singing. When someone tries to take on the masterful Freddy Mercury, as Cody did on Monday night, their heart can’t be only half in to the vocals or the result will be a gimmicky mess, which is somewhat what we got with Cody’s attempt. While I’m sad to see him go because he was a blast to watch, Cody’s elimination was the right decision moving into the final 6.

On the other hand, Dez Duron has been a thorn in my side since the start of the live shows. With little more talent than your average boy band member and no qualms about luring young girls to vote for him with charming smiles and Justin Bieber anthems, I just never could get on board the Dez train that Christina Aguilera begged for all of America to hop on. I am so grateful to the viewers of The Voice for not allowing looks and hype to outweigh genuine talent and creativity by eliminating Dez and keeping other, perhaps less pretty contestants like Nicholas David and Trevin Hunte around.

Next week the top 6 contestants will perform live and with Team Xtina completely knocked out of the competition, the blonde powerhouse coach should have no problem voicing her strong and often blunt opinions for the remaining contenders, which should make for some entertaining banter amongst the coaches.

What did you think of last night’s eliminations? Did the right people go home in your opinion?