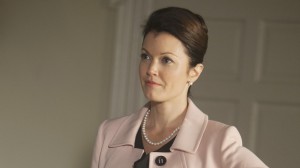 A birthday should be a time to celebrate and reflect, a day of appreciating how far you’ve come in the previous 365 days that reminds you of the good in life. However, on Scandal, a birthday is all about paranoia, in-fighting, and a potential disaster.

It’s Fitz’s 50th birthday party on the next episode of Scandal, although he’s given Mellie control of the event that has turned into something much bigger than either of them wanted. Although you’d think that FLOTUS would be excited to dazzle the media and add to her political cred as a supportive wife, Mellie doesn’t want to get out of the limo and face the flashing lights, adoring crowd, and Olivia Pope. Fitz thinks that the reason Mellie is so hesitant to enter the party is that she doesn’t want to be around Olivia; he tells her that she’s not his mistress anymore and “you won,” but Mellie’s demeanor suggests that Olivia isn’t her primary concern.

Considering her position in the cabal club with Hollis and an increasingly unhinged Cyrus, she might be afraid that her husband will become a target of theirs and open himself up to being struck by being in a public forum like that. Or, potentially, there’s a plan to hit another person at the party and she thinks Fitz might be in harm’s way.

Elsewhere on Scandal, Harrison leads the team in a case of a billionaire on the brink of insanity, while James uncovers something in his investigation that could send shockwaves through D.C. if leaked. He’ll be faced with a nearly impossible choice as a result – does he run with the information and advance his career or does he sit on it and stay in Cyrus’s good graces?

Is Fitz making the right move in going through with the party? Could part of Mellie’s hesitance to get out of the limo have to do with nerves in facing Olivia? What do you think will happen at the birthday party?