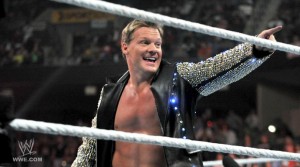 If you said yes to any of those three questions, Syfy has the show for you in the upcoming Robot Combat League. Set to premiere Tuesday, February 26th at 10:00, the show will feature tournament-style battle rounds featuring eight-feet tall robots controlled by a human. The competition will featuring 12 teams in total, one person (the “robo-jockey”) wearing an exo-suit that translates their movement to the robot and the other (the “robo-tech”) acting as the robotic engineer. Each battle consists of three rounds, with the winning team advancing to one level in the competition.

Robot Combat League will be hosted by WWE wrestler Chris Jericho, who will be providing color commentary on and setting up each weekly bout. Aside from his time in the ring, Jericho is the frontman for Fozzy, penned two best-selling books, and became a talking head for the VH1 “I Love the…” series.

The closest thing on television to Robot Combat League might be BattleBots, a Comedy Central series from the early 2000’s. On that show, teams constructed robots that fought in the middle of an arena, often equipped with weaponry and various protective shields. If both were still operational at the end of a bout, the winner would be derived from a point system that awarded aggression and damage inflicted.

Syfy recently announced premiere dates for new seasons of Lost Girl and Being Human, in addition to the U.S. premiere of Canadian import Continuum; all three will be bowing on Monday, January 14th. The network also has, among other shows, the next season of Face Off and the final series of Merlin coming up, the latter of which premieres Friday, January 4th at 10:00.

Will you be watching Robot Combat League? How do you think the robots themselves will look? Is this the type of reality programming that you like to see from Syfy?