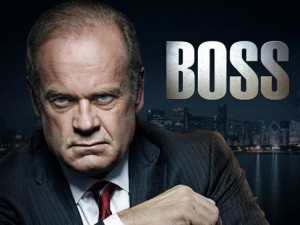 It’s my job to be positive, so we’ll start there. At least we won’t have to sit through another round of the Golden Globes as presenters mumble about a show nobody was watching. Namely, Boss. While critics apparently watched and loved the Starz show, the network has announced:

“After much deliberation, we have made the difficult decision to not proceed with Boss. We remain proud of this award-winning show, its exceptional cast and writers, and are grateful to Kelsey Grammer, Farhad Safinia and our partners at Lionsgate TV.”

I wish I could say I was sorry or surprised, but I’m not either one of those. The ratings were abysmal even for Starz, so two seasons was a blessing. To you who did enjoy the show, I am sorry. It’s never fun to see a show you enjoy cancelled, so you’ll be happy to know that according to The Hollywood Reporter, Starz is in talks to finish out the series with a two-hour movie so you aren’t left hanging with the details, such as Kelsey Grammar’s character Tom Kane’s illness still hanging in the balance. It’s nice when a network cares enough about their audience, whether large or small, to give it a proper ending.

Boss was an interesting test series for Starz, as it was picked up never going to pilot. I don’t know if that made it more or less likely to succeed, but the latter was the case with the viewers, at least. Another Starz series, Magic City, outperformed Boss in its freshman season and was produced in-house in contrast to Boss’ Lionsgate TV production.

Starz will introduce four new series this year with what appears to be a focus on period dramas. Da Vinci’s Demons, limited series The White Queen, Marco Polo and Michael Bay’s Treasure Island prequel Black Sails will join Magic City and  the final season of Spartacus.