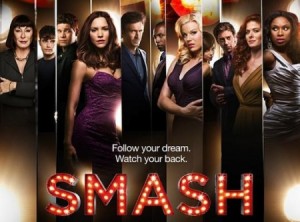 As we’ve shared in a previous post, NBC’s ambitious production of a Smash, starts its second season on February 5th. While Smash premiered to critical acclaim and generous ratings, it ended its freshman run with less than favorable reviews and as the 47th most watched show of the season.

Some elements of Smash were spectacular, such as the rivalry between Marilyns, Katharine McPhee’s Karen Cartwright and Megan Hilty’s Ivy Lynn. Not only was the outcome unexpected, but the infighting was far more emotional and dramatic than it would have appeared at first blush. Cheering both characters on for different reasons episode by episode became the norm, and the unexpected outcome for viewers was the hope of friendship between the two. While fleeting, the glimpses show promise and the anticipation remains.

What didn’t work were several of the male characters. Most notably Ellis Boyd, the assistant from hell. We thought he was gone when fired by Christian Borle’s character Tom Levitt, only to find he popped up as the assistant to Angelica Huston’s Eileen Rand. If he didn’t make it into the most despised character list of every site on the Internet, I’d be surprised. There wasn’t one notion about Ellis worth watching.

Sadly, Brian d’Arcy James, one of the few true Broadway vets on Smash had absolutely no role to play in relation to the Marilyn production, and quickly wore out his welcome as Frank Houston, husband to Debra Messing’s Julia Houston. It didn’t help that she was having an affair with another annoying character, Marilyn’s Joe DiMaggio, Michael Swift, played by Will Chase, who was also given his walking papers. Rounding out the male leads hiking out of town was Karen’s boyfriend, Dev Sundaram, who appeared to have two affairs, one with a coworker and one with Ivy. He was played by Raza Jaffrey. How these characters will be written out of the show remains to be seen, but there were generous hints given as the show took its bow for season one.

Spotlight on Season Two! Formerly a Monday night program, we’ll see a shift to Tuesdays. New competition, new luck? We also find the addition of several new characters, and if the extended preview clip below, available exclusively from Yahoo! TV  is any indication, they will be relying heavily upon the new cast.

Another non-winning American Idol contestant to hit the big time (bigger time!), joining vet Katharine McPhee is Oscar winner Jennifer Hudson. She won her Oscar for Dreamgirls in 2006, and joins Smash as a two-time Tony Award winning actress, Veronica Moore. I have to admit I’m impressed with how they introduced her, because I couldn’t for the life of me imagine how she would fit into the Marilyn production without causing yet another giant rift in the cast. If she’s there as an established star to mentor Karen and Ivy, or even as a cautionary tale, that’s just perfection. Using her to draw viewers instead of chasing them away from already established relationships within the cast is brilliant.

Joining Hudson will be Tony nominated actor Jeremy Jordan (Newsies) as what appears to be a reluctant, yet extremely talented Broadway newcomer and potential love interest for Karen, as well as Jesse L. Martin, who starred it the original Broadway production of Rent as Tom Collins, as Scott Welker, artistic director of the Manhattan Theatre Workshop. Interestingly, another original Rent cast member, Daphne Rubin-Vega joins the cast as a publicist, but won’t be doing any singing or dancing. I guess they didn’t learn their lesson by wasting the talent of Brian d’Arcy James.

We also see from the clip that Sean Hayes will be making an appearance. He seems a polarizing individual, you either love him or  hate him. But, how long would it be before he joined his former Will & Grace co-star Debra Messing on Smash? Bernadette Peters will be back as Ivy’s mom, and she appears to be giving her loving advice. Ivy seems to be continuing her habit of getting in her own way and whining about it. How about singing an upbeat song instead of one about loss and regret? Eileen’s financial woes appear to take a turn for the worse, and it looks like her boy toy, Nick (the handsome Thorston Kaye) ends up in prison?!

Yes, Smash will be bringing on the glorious soapy goodness for season two, without the slaptastic creeps we want to smack around on season one, with the addition of award winning cast members. What more can we ask for?