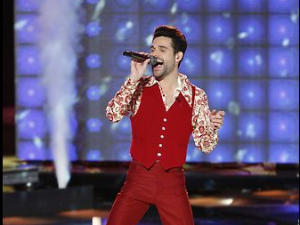 Last week on The Voice, after a very entertaining top 12 live show, we said goodbye to Team Christina’s Adriana Louise and Team Blake’s Michaela Paige. Although it was sad to see them go, tonight we must move forward with the top 10 remaining contestants battling it out to try to make it to the end and become the next winner of The Voice.

After last week’s close call, there is no doubt that Cody Belew and Melanie Martinez will be sweating it out trying to earn the votes of viewers with their performances this week. We can expect to see both attempt to take it up a notch, however, with so many fan favorites this season that apparently do not include Melanie or Cody, it might be difficult for them to find their way out of the bottom two this week.

Also trying to make a comeback after last week’s disastrous performance will be Amanda Brown, whose rendition of Florence and the Machine’s “Spectrum” left everyone shrugging their shoulders and wondering what had happened.  The remainder of the contestants had average to good performances last week, so they will be focusing their energy on trying to be consistent and not falling into the trap that swallowed up Amanda last week.

After tonight’s live performances, the fates of the remaining 10 contestants will lie in the hands of the viewers, with the judges’ hands completely tied. Tomorrow, we will find out who will be heading home and who will make it into the top 8 to sing next week on The Voice.