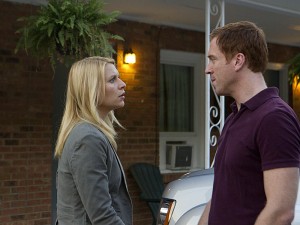 Tonight on Homeland, Brody’s worlds are continuing to hurdle toward their inevitable collision. Once able to be The Patriot and The Terrorist without much thought, he’ll finally grow tired of the lies, the lack of information, and constant anxiety and opt out of his situation with Roya and Nazir. In the promo for the episode, Brody jumps the surveillance the CIA had on him and heads off the grid – with Carrie in tow. The two have been increasingly drawn to one another since Brody was granted a deal following his interrogation and this is the latest moment stolen by the two former lovers, but at what cost? Brody may be on the edge following a rough couple of episodes, but will the CIA accept him back into the fold after booking it out-of-town? And has Carrie undone every bit of good will she earned following the capture of Brody?

Elsewhere on Homeland, Dana is still in limbo regarding going to the police over the accident. At the end of last week’s episode, Brody was informed by Carrie that he couldn’t let his daughter confess or it would nullify the deal that he had with the CIA, so for now, Dana’s a girl with a truth burning a hole inside her conscience. How long she decides to stay silent is another issues that Brody will have to keep in mind when deciding where his allegiance actually lies. Although Dana wouldn’t deliberately try to get her father in trouble, her disappointment over Brody’s secrecy might cloud her judgment for a while and since she doesn’t know all the details about his split loyalty, she wouldn’t think much of going to the station on her own accord.

Where do you think Nicholas Brody’s loyalty actually lies: with Roya and Nazir or with Carrie and the CIA? How long will it be before Jessica figures out that Brody’s lying to her regarding his role with the CIA? If Brody doesn’t take Dana to the police to confess, should she go on her own accord?