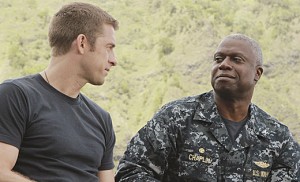 ABC has officially pulled the plug on freshman dramas Last Resort and 666 Park Avenue, according to Deadline. The network has opted not to order any additional episodes of either show, though they’ll let all 13 episodes of each play out before replacing them. Both Last Resort and 666 Park Avenue had received small script orders earlier in the fall, but ultimately, their tepid performances in the ratings led to that order being nixed.

ABC has yet to reveal their mid-season schedule, so it’s unclear what will replace both shows once they finish their runs. The network could opt to debut Red Widow in place of 666 Park Avenue, as the mob drama seems like a kindred spirit to Revenge, but it could be deemed too similar and something like Scandal or Nashville might be moved instead. In terms of replacing Last Resort, ABC could move Friday night standout Shark Tank to a more competitive night, but they might not want to risk rocking the boat on their most successful line-up. Other options for the night include reality fare (Wife Swap, Wipeout) and adventure drama Zero Hour, in addition to a potential veteran like Castle moving into the slot.

With today’s cancellations, ABC has now made a decision on each of the shows they debuted this fall. While 666 Park Avenue and Last Resort aren’t going forward, suburban alien comedy The Neighbors and country music drama Nashville have both been granted a full season each. Additionally, the network extended the order for Scandal’s second season, taking it from an initial 13 episodes to a full 22.

Last Resort airs Thursdays at 8:00 on ABC, while 666 Park Avenue airs Sundays at 10:00 following Revenge. The two will be off the air come February sweeps, though both will have the opportunity fine tune their finale to make them more concrete and answer questions.

Do you think that ABC made the correct decision in not going forward with either show? In your opinion, what factors led to neither show being able to connect with audiences? If you were ABC, what would you put in their place at mid-season?