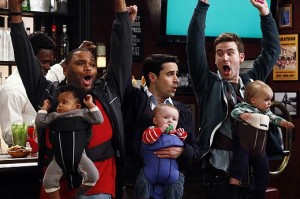 Two freshmen shows have been given additional life today.

According to Deadline, NBC has ordered four more episodes of the Jimmy Fallon-produced Guys With Kids, bringing the seasonal total to 17. The network had previously given the multi-cam an order of five scripts and the moderate performer, which has already outlasted original time slot companion Animal Practice, has been steady enough to earn at least four. However, with NBC still having comedies on the bench, steadiness might not be enough to earn a full season of 22 episodes.

Also per Deadline, CBS has given Elementary another two episodes on top of an already full season pickup, giving the detective procedural a 24-episode debut season. The show was recently selected by the network to air following the Super Bowl in February, which, along with the expanded order, should serve as a vote of confidence for Elementary. The Jonny Lee Miller/Lucy Liu drama, a take on Sherlock Holmes, has drawn positive ratings and fairly solid ratings thus far in its run.

It wasn’t all good news for freshman shows today, though, since The Eye cut the episode order for Vegas. Granted, the reduction is only by one episode, the period drama will more than likely be airing the entire season, and the cut might by for purely scheduling reasons. However, with the soft performance by the show, you have to wonder how much of the reduction is the network attempting to alleviate the damage it’s doing to their Tuesday night line-up.

Guys With Kids airs Wednesdays at 8:30 on NBC, while Elementary airs Thursdays at 10:00 and Vegas airs Tuesdays, both on CBS.

Are you watching Guys With Kids, Elementary, and/or Vegas this season? Do you think that viewers should be remotely concerned by the reduction in Vegas’s episode order, or is it more circumstantial than performance-based? Will Guys With Kids get any additional episodes aside from these four?