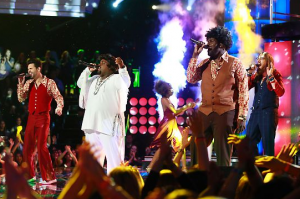 Last night on The Voice, the top 12 became 10 when America’s votes sent two contestants home and while the results weren’t all that surprising, it was still a bit sad to see them go.

The results started off predictably enough, with Carson methodically announcing two by two which contestants would be safe. In order to keep us in a little bit of suspense, Mr. Daly kept known fan favorites such as Trevin Hunte and Terry McDermott under the spotlight and at risk of elimination for the first few rounds of “safety announcements.” Inevitably, however, these two, along with other front runners such as Sylvia Yacoub and Amanda Brown were given the all clear signal, to which many adoring fans breathed a sigh of relief because with America voting, you just never know.

The last two contestants saved for the night, after waiting almost the entire results show to learn their fates, were funny farm boy Cody Belew and whispery singer Melanie Martinez, leaving Adriana Louise and Michaela Paige holding the bag. Adriana, who was only saved last week thanks to coach, Christina, seemed unsurprised by her elimination, while Michaela put a stoic foot forward and offered a bit of inspirational advice to the viewers.

Amidst the tension filled results that Carson delivered throughout the show, were performances by the contestants and at times, their coaches. Watching the coaches perform with pride alongside their teams was not only entertaining, but it kept the results show from seeming like it was just trying to fill up the time slot and instead, more like it was celebrating the top 12.

Next week, the top 10 will perform in hopes to earn a spot in the top 8 and stay on the road to becoming the next winner of The Voice.