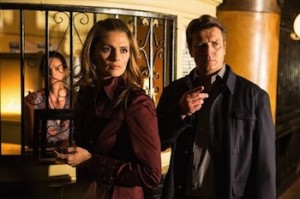 I really hope I’m not the only one that thinks that so far season 5 season feels different. Different in the most amazing way possible. It feels so much fun, and I’m pretty sure the actors feel the same way. The acting is great (always is), the dialogue is so witty and the little looks Beckett and Castle give each other just melts my shipper heart. Everything is just so super easy when your lead actors have such amazing chemistry. Stana and Nathan continuously amaze me every week.

That being said, let’s start off with the case of the week. Our victim is James Swan, lead guitarist of the band Holy Shemp who is found dead in his trailer. The documentary crew that were following the band around end up following the team as they solve the case.

Suspect #1 was Joe Silva. His daughter Butterfly was the groupie Kate, Castle and Lanie found in the closet inside the trailer. All Joe wanted to do was find his daughter. Suspect #2 Sam Spear. He was writing songs for James. Suspect #3 Keith, member of the band. Suspect #4 John Campbell, leader of the cult that James Swan was once a member of. Campbell took $25,000 from James.

It turns out Zeke, member of the band was the killer. He killed James because he told him he was out of the band because of Buck Cooper. Buck was a roadie and Swan’s best friend from back when they were in the cult. He was trying to get away and James was helping him. James wanted Buck as the new bassist and Zeke was not happy about it.

I absolutely loved this episode. I giggled throughout the whole thing. I think if anyone were to watch this show with me, they’d think I was nuts. The documentary style was really different and daring, but it totally paid off. As viewers, got to see a different side of the characters. You just had to know Castle was going love being in front of the camera. The ones that really impressed were Ryan and Esposito. Espo with his “Boom, have you been to the gun show” had me in stitches. Lanie was great too, with her getting Kate and Castle to come down to the M.E.’s office just for something she’d normally just call about,  and then totally flaunting herself to the camera.

Kate was the only one uncomfortable in front of the camera. Stana played it so well tonight. As the episode went on though, Beckett was getting a bit more comfortable. Caskett moment alert! Castle reassuring Kate about the documentary crew filming them solving the case and him telling her “I want them to see what I see.” Let’s all just let out a little “aww.” Second Caskett moment, this one not so monumental but Castle telling Kate to interrogate Keith herself. She asks why and he tells her he wants to give her room to operate and strut her stuff. Such a sweet boyfriend. The third adorable Caskett moment that the cameras caught was Castle putting Kate’s hair behind her ear and caressing her face; stupid camera for ruining that moment! One of the biggest laugh out loud moment for me belongs to Espo, Castle, Kate and Sir watching Keith’s alibi a.k.a – the sex tape. A little zinger from Kate, “It’s not the only thing on this video being faked.”

Sir tells Castle and Beckett she’s going to be reviewing all of the film footage. You know to make sure it reflects well on the precinct. It prompts Castle and Beckett to go to the director pleading with him not to show that sweet moment they had. At the end, Captain Gates calls Castle and Beckett into her office and we assume its because of the footage of them together, but it turns out to be another moment the crew caught. While Gates was making a speech, Castle was behind her doing all sorts of goofy things. Caskett is safe! I wonder what happened to that missing tape…

The ending was quite sweet with Espo singing the new song with Keith and Buck. Jon Huertas can actually carry a tune. Kate then luring the camera man into the janitors closet and shutting door and sticking her tongue out was pure perfection!

Is it next monday yet?