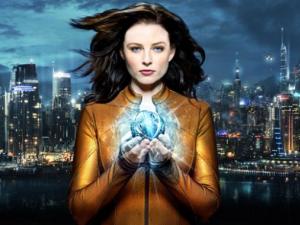 SyFy has acquired distribution rights for Canadian hit series Continuum starring Rachel Nichols, Erik Knudsen and Victor Webster. Kiera Cameron (Nichols) is a Protector (police officer) in the year 2077. When a group of terrorists is scheduled to die, they have something else up their sleeve and unwittingly send themselves back in time to 2012, taking Kiera with them.

Stuck in a world she knows only from the history books, Kiera is armed only with her Proctor suit from the future that has more to offer than an entire police force does in the present. Once she realizes she is not alone in the past, she teams up with the local police department and a new partner, Carlos Fonnegra (Webster). Through her suit, she also locates the man who created it, Alec Sadler (Knudsen) who is a mere boy when she meets him again, albeit one with the same technical genius she knew in him as an adult in 2077.

Continuum does a brilliant job of folding together Kiera’s two worlds, focusing on both her longing to return to her family and her desire to stop the terrorist act Liber8 has traveled back in time some 60 years to bring to fruition.

Littered with familiar faces, Continuum is both intellectually and emotionally engaging, as well as pretty to watch. Nichols has starred in series such as Alias, Criminal Minds and The Inside as well as many feature movies, Erik Knudsen was prominently featured in cult favorite Jericho and Webster has been seen in Mutant X, Charmed and Castle.

The first season has already aired in Canada and a second season has been ordered for the series. SyFy has acquired rights for both seasons, and set a premiere date has been set for the first season of January 14th. Mark your calendars, because if you are a fan of sci-fi, time travel and terrorism plots, this is one show you won’t want to miss!