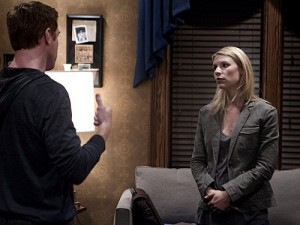 Tonight on Homeland, the noose around Brody’s neck tightens when Roya comes calling for more help following the shootout at Gettysburg. There may be some part of Brody that wants to help her carry out the plan against America and exert some type of vengeance in the memory of Issa, but he’s being pulled in two directions even moreso now. The CIA are going to have him on a tighter leash since Carrie has doubts as to where his true loyalty lies, while Roya wants him to pick up more responsibility now that a member of their team died in the shootout. We don’t know where Brody’s mind is at right now and honestly, I don’t think he has a clear idea of which side he wants to play for, either. This choice, though, will give us a better idea of how much truth there was in his interrogation with Carrie and how much was theater.

Elsewhere on Homeland, Dana wants to confess to what happened the night of the car accident. She had already been feeling guilty and visiting the hospital where the victim was staying (combined with finding out that she died) pushed her to want to go to her parents. The only problem is that Finn isn’t exactly supportive of the idea of coming clean, considering who his father is and the spotlight already on him. Although we haven’t seen enough to fully confirm the idea, Finn’s reaction when Dana tries to talk to him about the accident at school suggests that he might do anything to keep her from confessing. Might Dana be in danger of being silenced by her quasi-boyfriend?

Do you think that Brody will be able to maintain his loyalty to the CIA after being confronted by Roya? Will Carrie lose herself in the idea of being with Brody? Can Dana confess to what happened before Finn (or anyone else) tries to stop her?