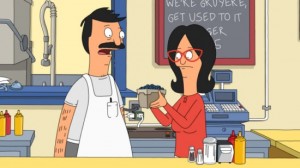 Tonight on Bob’s Burgers, Bob gets a pretty impressive offer from a local sea captain to be his private chef during a 10-day voyage to Puerto Rico. The only problem is that he’d have to bring Linda, Tina, Gene, and Louise, and shut the restaurant down for the entirety of their time away, as there’s no one that could come in to run it in their absence. Although we don’t know how much Captain Flaherty (guest star Jeffrey Tambor) would be willing to pay and if that’d make up for the lost income, he does offer to let Bob come aboard the currently docked ship to make a meal, which might serve as an audition for future gigs.

Or at least help Bob’s word-of-mouth.

When Bob and the family get on board, they begin to notice that the ideas they had about the ship aren’t the reality that they’re seeing. Rather than romantic drawings and boats going down in flames, there’s a tongue-happy capybara and a chef that might have been trapped on board following a similar situation that Bob is in now. What once seemed like an easy way to make a couple bucks and placate the family has turned into a situation where getting off the boat might be the biggest reward of all and the family will have to come up with a way to make it back to the safety of their restaurant before they’re trapped on the boat for good.

What will it take for Bob and his family to get off the ship once the captain reveals that he doesn’t plan on letting them go? Would you have accepted his offer if you were Bob? Will Louise get her wish to sink the boat?