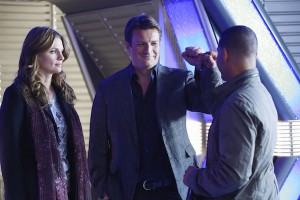 “How am I going to unsee that?” A wise question from Castle to Beckett  when they investigate a murder at a local sci-fi convention, as it never occurred to Castle that he might run into his own precious cargo, Alexis, dressed as one of her favorite characters. Or, undressed, as you’ll witness in the clip below.

Any time the worlds of sci-fi and Nathan Fillion clash, you have to wonder whether or not there will be easter egg references to his iconic run as Captain Malcom Richards in Firefly. Given the topic alone, I’m betting on above average ratings for this episode as Firefly fans tune in hoping for that very thing.

It should be fun watching Castle deal with fandom from the outside and maybe as a fan himself instead of as Fillion, who is mobbed and at the heart of every convention he attends. Tune in to Castle, co-starring Stana Katic as Kate Beckett, on Castle tonight at 10 Eastern on ABC for all the fun!